Global warming and climate change will be one of the main issues in the near and foreseeable future. It’s impact will affect our economy and security with new challenges. The more rapidly we address these challenges the more affordable will be the solutions.

Learn more about the science and myths of this global warming event:

Politics must not get in the way of “Common Sense”. The Environment is a National and Global Security issue. Protecting natural resources is key to quality of life. If we ignore the environment and the resources available to sustain our quality of life we risk the depletion of the very resources required to support a higher quality of life. Balance is key in all areas of environmental protection. In the current climate crisis we face, advancement of carbon sequestration programs parallel to healthy energy policy will enable us to begin the process of undoing the damage already evident.

This image provided by NASA/NOAA clearly shows that this global warming trend began with the industrial age.

If this trend continues at the same pace, the temperature should increase .5 degrees F every 10 years. However, there are clear indications that the warming is accelerating.

The expected effects of this global warming trend include:

To the question of human contribution to global warming NOAA:

Practically speaking and in simple terms. Since the earth was cooling prior to the industrial revolution, it is safe to say that the percentage of human caused global warming is between 93% and over 100%. Solar irradiance accounts for about 7%.

The major uncertainties lie not in the understanding that this is human caused climate forcing but in the speed of acceleration and effects in the future.

Relevant scientists that work in the field now have 99% confidence in the relevant data and its implications. Action on an international scale is required to address the affects of this human caused climate forcing. The total result or impact of inaction is not yet scientifically predictable, but common sense can be easily applied to the known facts and extrapolated into a picture of understanding by those that examine the facts as they are now understood.

Exponential factors such as desertification, deforestation, black soot deposits (ref. NASA), and an increase of forest fires (releasing Co2 from the carbon sink) is expected to accelerate the warming trend. Go to NOAA Link

How can I be optimistic if, as I have argued, climate is now in the hands of humans and it is closer to the level of “dangerous anthropogenic interference” than has been realized? If we compare the situation today to that 10-15 years ago, we realize that the main elements required to halt climate change, as summarized above, have come into being with remarkable rapidity. I realize that it will not be easy to stabilize greenhouse gas concentrations, but I am optimistic because I expect empirical evidence for climate change and its impacts to continue to accumulate, and that this will influence the public, public interest groups, industry, and governments at various levels. The question is: will we act soon enough. It is a matter of time. 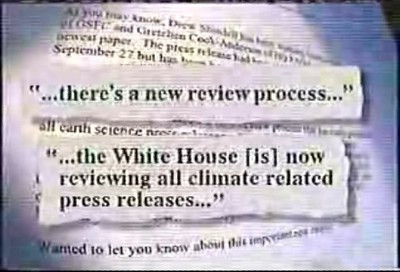 60 Minutes interview with Dr. Jim Hanson (Director of the Goddard Space Institute and considered one of the top three leading climate scientists in the world.) and others interviewed.

As reported by 60 minutes:

Dr. James Hansen, Director of the Goddard Space Center, reports that “…man has just 10 years to begin to reduce greenhouse gas emissions or global warming will reach what he calls a tipping point and will become unstoppable”. He says the White House is blocking that message. Hansen’s institute received from NASA in 2004 (shown in the picture above).

Rick Piltz sent review drafts of the report to the White House, “It comes back with a large number of edits handwritten by the “Chief of Staff” of the “Counsel on Environmental Quality”, “Phil Cooney” a lawyer, formally a lobbyist for the “American Petroleum Institute” before going into the White House.” In June, he (Phil Cooney) left the White House and went to work for Exxon Mobile”.

When 60 minutes asked to speak with the president Bush’s “National Science Adviser” They were informed, after months of trying to get an interview, “that he would “never” Watch Video [Note: Video now unavailable] be available”. 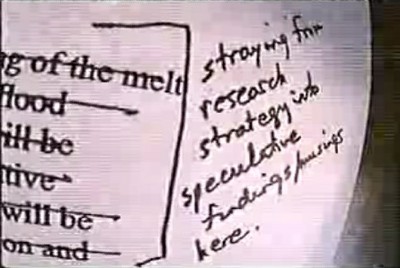 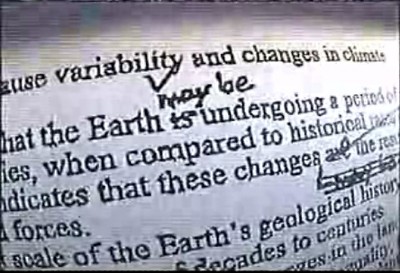 The Intergovernmental Panel on Climate Change (IPCC) has been established by WMO and UNEP to assess scientific, technical and socio-economic information relevant for the understanding of climate change, its potential impacts and options for adaptation and mitigation. It is open to all Members of the UN and of WMO.

Before the Committee on Governmental Affairs

The Environment is a National and Global Security Issue

“Global Warming” and “Climate Change” in accordance with the known circumstances in paleoclimactic data and recent data are reasonably and strongly indicative to be the result of human factors. The NOAA chart shows the linear progression into a mini ice age and burning oil is coincidental with an interruption to the global cooling.

Immediate attention must be paid to reason and common sense with regard to these topics as the predictable resultant effects directly impact our quality of life on earth for the human race and all other species on the planet.

Every Day Has A Cost

The amount of controversy in this area should not ameliorate the importance of the application of reason. Consider the Montreal Protocol regarding ozone depleting chemicals that are produced by man. The same arguments that surrounded that argument also encompass the global warming argument. We must not forget that there is a lot of money involved in decisions regarding environmental safety.

Prudence is the kinder side of reason. Even if this global warming phase were a natural cycle, and it will increase the temperature on the planet to such a degree as predicted, then prudence dictates that we don’t contribute to the natural effect.

In reality, the evidence is sufficiently clear that global warming is human caused, as we have reversed the mini-ice-age that the paleoclimactic data has shown we were well into. Smart policy and action is the next step. Those that believe it is not human caused have no credible arguments in the light of insurmountable evidence now known. The only variables now seem to be the amount of danger the human race faces in the coming years and what steps should be taken to ensure the public safety in the future as best we are able.

The main human activities that contribute to global warming are the burning of fossil fuels (coal, oil, and natural gas) and the clearing of land. Most of the burning occurs in automobiles, in factories, and in electric power plants that provide energy for houses and office buildings. The burning of fossil fuels creates carbon dioxide, whose chemical formula is CO2. CO2 is a greenhouse gas that slows the escape of heat into space. Trees and other plants remove CO2 from the air during photosynthesis, the process they use to produce food. The clearing of land contributes to the buildup of CO2 by reducing the rate at which the gas is removed from the atmosphere or by the decomposition of dead vegetation.

ABSTRACT: Climate Over Past Millennia 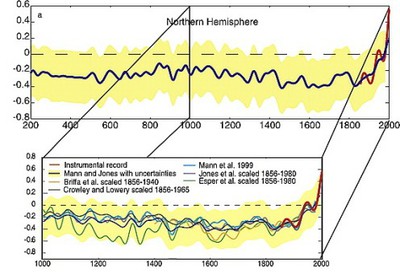 We review evidence for climate change over the past several millennia from instrumental and high-resolution climate “proxy” data sources and climate modeling studies. We focus on changes over the past 1 to 2 millennia. We assess reconstructions and modeling studies analyzing a number of different climate fields, including atmospheric circulation diagnostics, precipitation, and drought. We devote particular attention to proxy-based reconstructions of temperature patterns in past centuries, which place recent large-scale warming in an appropriate longer-term context.

Our assessment affirms the conclusion that late 20th century warmth is unprecedented at hemispheric and, likely, global scales. There is more tentative evidence that particular modes of climate variability, such as the El Niño/Southern Oscillation and the North Atlantic Oscillation, may have exhibited late 20th century behavior that is anomalous in a long-term context.

Regional conclusions, particularly for the Southern Hemisphere and parts of the tropics where high resolution proxy data are sparse, are more circumspect. The dramatic differences between regional and hemispheric/ global past trends, and the distinction between changes in surface temperature and precipitation/drought fields, underscore the limited utility in the use of terms such as the “Little Ice Age” and “Medieval Warm Period” for describing past climate epochs during the last millennium.

Comparison of empirical evidence with proxy-based reconstructions demonstrates that natural factors appear to explain relatively well the major surface temperature changes of the past millennium through the 19th century (including hemispheric means and some spatial patterns). Only anthropogenic forcing of climate, however, can explain the recent anomalous warming in the late 20th century. NOAA Paleo Link

Paleoclimactic Data for the last 150,000 years. 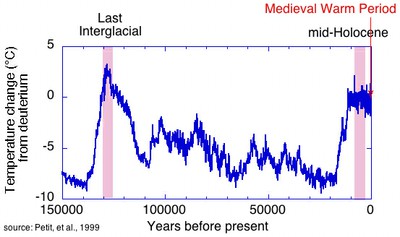 Note: This graph has not been updated since 1999. View NCEI NOAA