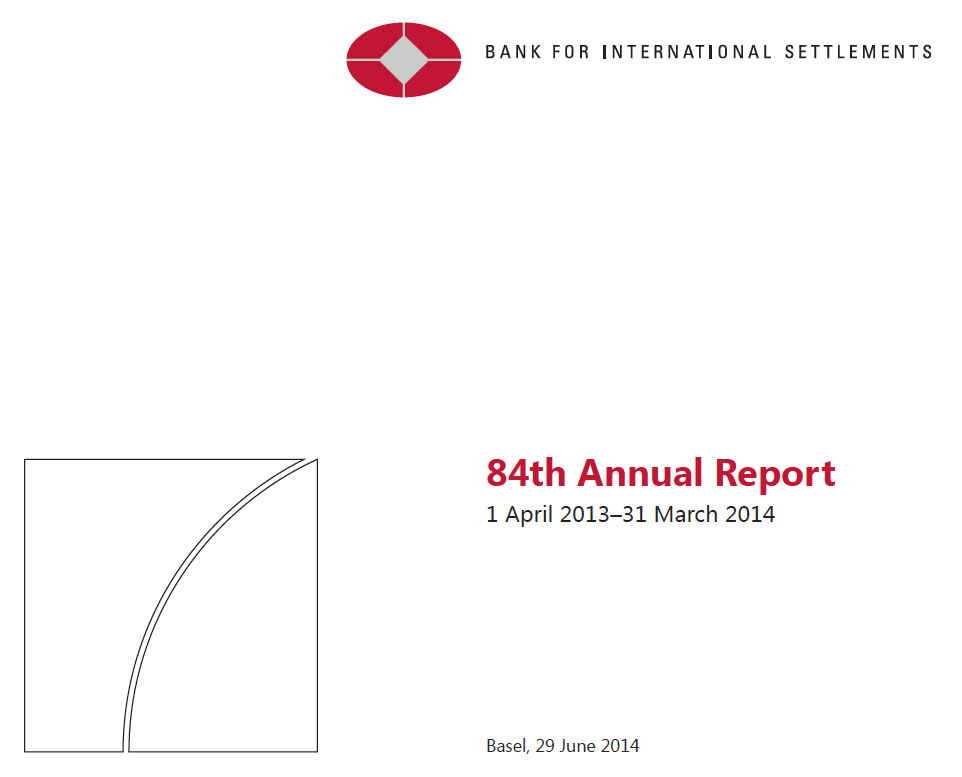 Bank for International Settlements, 84th Annual Report, Released 29 June 2014, Basel, Switzerland. The BIS report outlines the general assessment of economic risks and considerations for World Banks and governments. It is worthwhile for the public to be aware of the views and considerations as the risks to the economy in fact relate as risks to everyone.

Overview of the economic chapters

I. In search of a new compass

The global economy has shown encouraging signs over the past year. But its malaise persists, as the legacy of the Great Financial Crisis and the forces that led up to it remain unresolved. To overcome that legacy, policy needs to go beyond its traditional focus on the business cycle. It also needs to address the longer-term build-up and run-off of macroeconomic risks that characterize the financial cycle and to shift away from debt as the main engine of growth.

Restoring sustainable growth will require targeted policies in all major economies, whether or not they were hit by the crisis. Countries that were most affected need to complete the process of repairing balance sheets and implementing structural reforms. The current upturn in the global economy provides a precious window of opportunity that should not be wasted. In a number of economies that escaped the worst effects of the financial crisis, growth has been spurred by strong financial booms.

Policy in those economies needs to put more emphasis on curbing the booms and building the strength to cope with a possible bust, and there, too, it cannot afford to put structural reforms on the back burner. Looking further ahead, dampening the extremes of the financial cycle calls for improvements in policy frameworks – fiscal, monetary and prudential – to ensure a more symmetrical response across booms and busts. Otherwise, the risk is that instability will entrench itself in the global economy and room for policy manoeuvre will run out.

II. Global financial markets under the spell of monetary policy

Financial markets have been acutely sensitive to monetary policy, both actual and anticipated. Throughout the year, accommodative monetary conditions kept volatility low and fostered a search for yield. High valuations on equities, narrow credit spreads, low volatility and abundant corporate bond issuance all signalled a strong appetite for risk on the part of investors.

At times during the past year, emerging market economies proved vulnerable to shifting global conditions; those economies with stronger fundamentals fared better, but they were not completely insulated from bouts of market turbulence. By mid-2014, investors again exhibited strong risk-taking in their search for yield: most emerging market economies stabilised, global equity markets reached new highs and credit spreads continued to narrow. Overall, it is hard to avoid the sense of a puzzling disconnect between the markets’ buoyancy and underlying economic developments globally.

That weakness reflects a number of factors: supply side distortions and resource misallocations, large debt and capital stock overhangs, damage to the financial sector and limited policy room for manoeuvre. Investment in advanced economies in relation to output is being held down mostly by the correction of previous financial excesses and long-run structural forces. Meanwhile, growth in emerging market economies, which has generally been strong since the crisis, faces headwinds. The current weakness of inflation in advanced economies reflects not only slow domestic growth and a low utilisation of domestic resources, but also the influence of global factors. Over the longer term, raising productivity holds the key to more robust and sustainable growth.

IV. Debt and the financial cycle: domestic and global

Financial cycles encapsulate the self-reinforcing interactions between perceptions of value and risk, risk-taking and financing constraints, which translate into financial booms and busts. Financial cycles tend to last longer than traditional business cycles. Countries are currently at very different stages of the financial cycle. In the economies most affected by the 2007–09 financial crisis, households and firms have begun to reduce their debt relative to income, but the ratio remains high in many cases. In contrast, a number of the economies less affected by the crisis find themselves in the late stages of strong financial booms, making them vulnerable to a balance sheet recession and, in some cases, serious financial distress. At the same time, the growth of new funding sources has changed the character of risks. In this second phase of global liquidity, corporations in emerging market economies are raising much of their funding from international markets and thus are facing the risk that their funding may evaporate at the first sign of trouble. More generally, countries could at some point find themselves in a debt trap: seeking to stimulate the economy through low interest rates encourages even more debt, ultimately adding to the problem it is meant to solve.

Monetary policy has remained very accommodative while facing a number of tough challenges. First, in the major advanced economies, central banks struggled with an unusually sluggish recovery and signs of diminished monetary policy effectiveness. Second, emerging market economies and small open advanced economies contended with bouts of market turbulence and with monetary policy spillovers from the major advanced economies. National authorities in the latter have further scope to take into account the external effects of their actions and the corresponding feedback on their own jurisdictions. Third, a number of central banks struggled with how best to address unexpected disinflation. The policy response needs to carefully consider the nature and persistence of the forces at work as well as policy’s diminished effectiveness and side effects. Finally, looking forward, the issue of how best to calibrate the timing and pace of policy normalisation looms large. Navigating the transition is likely to be complex and bumpy, regardless of communication efforts. And the risk of normalising too late and too gradually should not be underestimated.

VI. The financial system at a crossroads

The financial sector has gained some strength since the crisis. Banks have rebuilt capital (mainly through retained earnings) and many have shifted their business models towards traditional banking. However, despite an improvement in aggregate profitability, many banks face lingering balance sheet weaknesses from direct exposure to overindebted borrowers, the drag of debt overhang on economic recovery and the risk of a slowdown in those countries that are at late stages of financial booms. In the current financial landscape, market-based financial intermediation has expanded, notably because banks face a higher cost of funding than some of their corporate clients. In particular, asset management companies have grown rapidly over the past few years and are now a major source of credit. Their larger role, together with high size concentration in the sector, may influence market dynamics and hence the cost and availability of funding for firms and households.