The 14th Amendment and Emergency Powers Act, specifically the International Emergency Economic Powers Act (IEEPA) enacted October 28, 1977, is a United States federal law authorizing the President to regulate commerce after declaring a national emergency in response to any unusual and extraordinary threat to the United States which has a foreign source.

The International Emergency Economic Powers Act (IEEPA) is an option that in combination with the 14th Amendment can be utilized by the President to prevent the threat of a debt default that would qualify as an ‘unusual and extraordinary threat to the United States which has a foreign source’. Avoiding such an obvious threat is the responsibility of our government, especially since the threat is known and obvious.

If the congress won’t act accordingly with a ‘clean’ bill, then the President may have to act without them.

The 14th Amendment can be used in conjunction with the IEEPA to assure the economic security of our nation should John Boehner, the Republican Party, and the Tea Party fail to pass the federal budget.

The IEEPA is a federal law authorizing the President to regulate commerce after declaring a national emergency in response to any such unusual and extraordinary threat to the United States which has a foreign source.

In this case a default on our debt with our foreign lenders has the potential to do significant damage to the US economy by creating a domino effect. That would most likely result in raising interest rates thus slowing our still sluggish economy.

…the Constitution is in some ways a two edged sword.

Therefore the president, in the event that congress fails to act to protect America’s interest may have to use the IEEPA and the 14th amendment to do congresses job for us. It might be considered extreme by some and certainly Fox news will spin it into all sorts of passionate arguments while trying to portray President Obama as a dictator in various ways….

Yes, presidents push the limits of presidential powers to protect America. Let us not forget that President Bush did the same during his administration, and many others have done so in previous administrations. The reality is that it ‘is’ the Presidents duty to do so. Will it be controversial? One would assume the answer to be ‘yes’.

The 2011 comprehensive CBO estimate projected a net deficit reduction during the 2012–2021 period resulting in a $210 billion net reduction in the deficit. The estimated impact including that ‘opt out’ ruling reduces the estimated Federal deficit savings to only $84 billion. 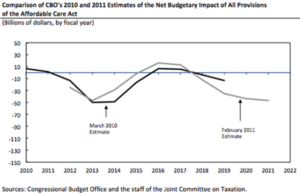 In other words, the Republicans of whom claim to be fiscal hawks have opted for more federal debt than projected because the are protecting their special interests.

George Stephanopoulos said in an interview with John Boehner that according to Harry Reid, John Boehner offered a ‘clean’ bill to fund the government back in July, 2013 that was reported to be $70 billion below what the senate wanted; they accepted it; but then John Boehner reneged on the deal: 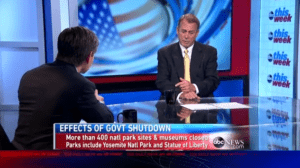 John Boehner: “I and my members decided that the threat of Obamacare, and what was happening, was so important that it was time for us to take a stand; and we took a stand”.

Therefore any and all attempts to blame the Democrats for the actions of the Republicans and the Tea Party should be considered hypocrisy, disinformation, political grandstanding, misleading, and blustering in an attempt to ‘not’ take responsibility for their choices in order to distract the public from the truth of their decision.

A lie repeated a thousand times does not make it true.

The reality is that the Constitution is in some ways a two edged sword. This allows for reasonable application and balance. Its use in certain circumstances is often debatable based on political perspective and even constitutional applicability. Nevertheless it is there to establish the basis for protecting and strengthening America and the rights of the American people; while preventing abuse of powers, and in this case giving the President the right to take action as needed to keep us from falling over a fiscal cliff.

The IEEPA is limited by the National Emergencies Act, of 1976.

This was enacted in order place a limitation on the TWEA act of 1917, which did not include congressional oversight. The overall effect was to give the president the power to manage emergencies when the house of representatives might be unable to make a decision. That seems to be the case now.

It is relatively clear that should John Boehner refuse to call a vote, even where there are sufficient votes available to pass the Federal budget, then President Obama may or should use the 14th Amendment and the IEEPA to assure the economic security of America.

This is still only a short term fix but it does give America a little bit more time to continue to ‘attempt’ to put our financial house in order. Unfortunately, special interest influence continues to get in the way of achieving such goals and our representatives are still subject to such influence.