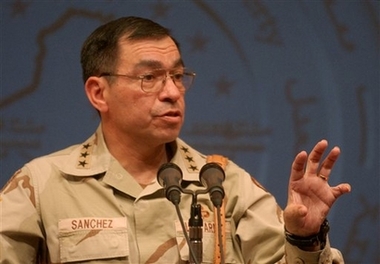 ARLINGTON, Va. – Retired Lt. Gen. Ricardo Sanchez stated regarding the U.S. mission in Iraq “There is no question America is living a nightmare with no end in sight”

Asked when the mission was going awry, he responded: “About the 15th of June 2003” — the day he took command.

“There is nothing going on today in Washington that would give us hope” that things are going to change, he said.

“There has been a glaring, unfortunate display of incompetent strategic leadership within our national leaders,…”

“America continues its desperate struggle in Iraq without any concerted effort to devise a strategy that will achieve ‘victory’ in that war-torn country or in the greater conflict against extremism,” he said.

Not mentioning President Bush, he called the president’s troop-escalation “surge” strategy a “desperate attempt by an administration that has not accepted the political and economic realities of this war.”

“There is no question America is living a nightmare with no end in sight,” he said.