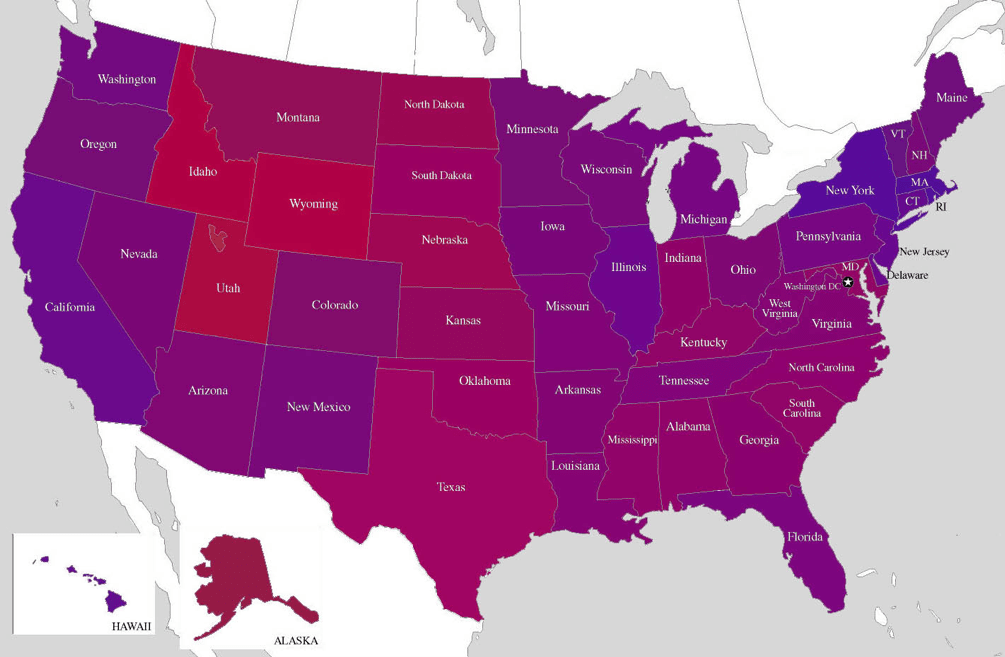 Blue, Purple and Red. It's a mix but largely Centrist.

It would be nice if the government joined the people in helping to fix healthcare, updating our educational system, getting the graft out of our military, moving our energy infrastructure into sustainable clean energy, driving our economic engines in a direction that considers need… On Iraq… it’s not a game of let’s see if this works.

Demographic analysis of the geo-political spectrum shows that we don’t really have ‘Red’ or ‘Blue’ states.

Arnold Schwarzenegger is a centrist. Centrist organizations are developing across the nation. California has already started “The Centrist Party” as well as “The California Association of Political Centrists”. Phil Power, the publisher, just formed “The Center for Michigan” to “. . . create a statewide citizen movement to help improve our economy, fix our dysfunctional politics and provide reasoned hope that things can get better for us and our children.”

New groups are popping up across the nation. Why? Because people and businesses realize that the American government is running with blinders on.

On the environment, Governor Schwarzenegger has decided not to wait for Washington. He says California will lead the nation since Washington won’t. CEO’s of American businesses have begun to start greening their operations to meet the needs of the world by curbing greenhouse gas emissions and developing more energy efficient operations.

On healthcare, communities are exploring ways to set up their own clinics to take care of their families and neighbors. Many are not waiting for the government to figure out how to fix things. People are realizing that the government is broken. It’s as simple as that.

Thomas Paine advised in 1776, “the more simple any thing is, the less liable it is to be disordered, and the easier repaired when disordered”. Unfortunately, our government did not heed this advice and we have thickened the layers of bureaucracy beyond our ability to understand the width and breadth of its dysfunction.

It is impressive to see people rise to the occasion while the government is mired in bureaucracy and special interests. It would be nice if the government actually joined the people in helping to fix healthcare, updating our educational system, getting the graft out of our military, moving our energy infrastructure into sustainable clean energy, driving our economic engines in a direction that considers need as well as available resources and changing markets.

On Iraq, adding 21,000 troops will have a negligible effect. Most Americans that have thought about this realize that half measures don’t work and only serve to further waste resources, increase debt, and tarnish the image of America. Either put in an overwhelming force, or get out. We can’t do this piecemeal, it’s not a game of let’s see if this works.

Our government needs an overhaul and there is only one way it’s going to happen. The people, the independents, the centrists and all those that believe in a better future, need to stand up and say we’re not going to take it anymore. The state of the nation and the world does not have time to wait for this government to get its act together. We need to fix it ourselves and Schwarzenegger is taking a first step.

The Governor in California has launched a new direction and is blazing a trail toward a path that makes sense. The faster we join the centrist direction, the sooner we will achieve our mutual goals. A better future we can call our own.

Join the centrist movements that are popping up across America and ask your representatives to join with America and the Centrist Party; we need a government that makes sense!

Join the CP: Let's Get This Party Started!