Student Protests in Dhaka, Bangladesh have turned violent over the past few days. The government reportedly shut down local cell phone and internet access for mobile devices apparently to prevent images of the violence against the protestors from getting out.

This news clip shows footage of the violence obtained from eye witnesses.

With fascism rising all around the world we are seeing more and more belligerent action from government to repress free speech. Bangladesh is no different. It is certainly feasible that the Trump Effect is reaching across the globe. His consistent encouragement of how great dictators are as he berates and puts down those from democratic nations is discouraging to freedom loving people around the world.

The Cost of Authoritarianism

But dictators have been around throughout human history. And what has been going on in Bangladesh has its roots in an election in 2009. The difference now is that around the world, dictators have the sense that America is no longer a threat, so they might feel they can get away with more, or are simply more comfortable since Trump took office.

Centrist News was able to attain the images and visual clips from a secure channel in Bangladesh. We hope the major news outlets will see this story and send someone to Dhaka and interview the students involved at the Universities. Freedom of the press has one main and honorable mission; to help reveal the truth so we can all make better decisions and hopefully enable better conditions in all nations. For the People.

Here are Statements/Images From University Students in Dhaka

04.08.18: Students as young as 13 -18 year old have been seen protesting and taking over the control of Dhaka traffic after the death of two students due to the mad race of two local buses in the capital. The protest was peaceful and also an eye opener for the nation to see how corruption is flowing in the veins of the government administration as an unbelievable number of drivers were stopped and exposed in live videos having no driving license, which sadly includes many police officers and ministers.

On 4th of August 2018 in Jigatala, Dhaka; police and the pro government student body (Bangladesh Chhatra league, BCL) started attacking the innocent teens protesting for their right to live, right to have a safe road. The government goons and the police attacked with stones, sticks on hundreds of teens who have no idea about violence.

[Note: I was able to communicate with those at the University. It is the saddest thing that no major powers pushed back]

Gun shots were heard and words of molestation of female students were rife which ignited the protesting students to attack back. Hearing from TV channels and facebook, a friend of mine and I went to the spot in the evening to join the protestors and distribute water bottles to them as these kids were all exhausted and drained. In front of Dhanmondi 3/A, where the Awami League party office is situated these kids were requesting the party people and polices to release few of protestors claiming that they were locked up in the party office.

As we were about to distribute the water bottles, suddenly hundreds of BCL men started coming out from the office with sticks, stones, sharp objects beating these unarmed teen protestors. The attackers were beating and taking away mobile phones from people who were recording video. After this attack, BCL taook control of the entire area and the protesting kids just ran and hid in a scattered manner. We too took shelter and eventually left the area.

06.08.18: Hello everyone. I am a student from BRAC University. I am not the best at expressing my thoughts but I will do my best to give a short narrative of what happened today (August 6, 2018 – Monday) during our peaceful protest.

We started gathering in front of our university premises at around 10-11am. Our intentions were to gather as many students as possible and continue our protest from where we left off the previous day. At around 11:30am we noticed multiple law enforcement (police) vehicles arriving at the premises and surrounding us slowly. Despite strict police surveillance, more and more protestors came and joined us in solidarity each passing minute.

A little past noon, representatives of East West University reached out to us via phone calls pleading for help, revealing that they were under attack by law enforcement and unidentifiable goons. They were outnumbered and they needed manpower. As a response we immediately started regrouping in order to march to East West University.

[Note: The plight of the University students in Bangladesh remains an unanswered issue. Why did the major media outlets report only what the government told them?]

After that we followed the police recommendation and left our university in groups of 2-3 students at a time. But we regrouped later near East West University because they were still under attack and needed immediate help. While we were trying to enter the East West premises policemen and unidentifiable goons who looked like they were 35-40 years old, began chasing us with knife like weapons and bamboo sticks in their hands. They shot rubber bullets at us too. Some of us were hit while the rest dodged the bullets and shielded themselves with their backpacks.

[Note: The goon squads fired weapons directly into the student protesters and beat students with clubs.]

(cont.) Unfortunately, amidst this chaos a group of 10-12 of our students (BRAC University) got isolated from the rest of us. 3-4 of them were female students and they were visibly traumatized under this heinous attack. One of the male students was captured and arrested on spot while another was beaten until his skull was fractured right in front of our eyes.

The remaining chunk of our students (BRAC University) finally succeeded to enter the East West premises. They helped their fellow protestors to the best of their abilities. Unfortunately, around this time law enforcement threatened the East West University authority present at the premises to shut down the protest. They said they would perform a raid inside the university if the protest did not stop immediately.

Everyone was traumatized, especially the female students who at that point started crying. So, for the sake of these students, all that were injured and everyone’s safety in general – we decided that we did our best for the day. It was time for us to go home. We left in small groups of 2-3 students again and headed back to our respective homes.

Today has been a failure for us. We wanted today’s protest to be as peaceful as possible. We hoped that we would do a better job of reaching out to the government about our demands. But we failed. We don’t plan to stop here though. We will regroup and continue until the government gives us a 100% assurance that our demands will be acknowledged and met.
Thank you.

06.08.18: The attacks started at East West University. As soon I heard that universities were being attacked I figured North South University could be next along with other universities. And soon enough I started seeing posts that Bashundhara gate was being attacked by the police. I, along with my friends, were sitting inside the cafeteria when we heard shouting in the plaza area.

The police were throwing teargas inside the campus. Students began running around the campus in utter chaos trying to find a safe place. We heard yelling and screaming at the gates and sounds of bullets being fired. We ran into the admin building where the scene was no less chaotic. Students were being wheelchaired inside; injured and bloody.

Our medical center was overloaded with injured and teargas affected students and faculty members. People were coughing and throwing up and our medical supplies were running low. Anyone outside of campus that wanted to bring us supplies were denied entry into Bashundhara. Soon after, students were shot with rubber bullets. Their backs covered in the wounds from those bullets. The floors of North South University are stained with blood of brave students who stood up for something that was right and just wanted to defend themselves and their university.

Police, special forces and goons fully armed hold their place in front of East West University, they shot few rounds of tear gas and rubber bullets at students but students managed to penetrate inside and rescued wounded students. Later after few hours of hostile negotiation students managed to get out of the premises. 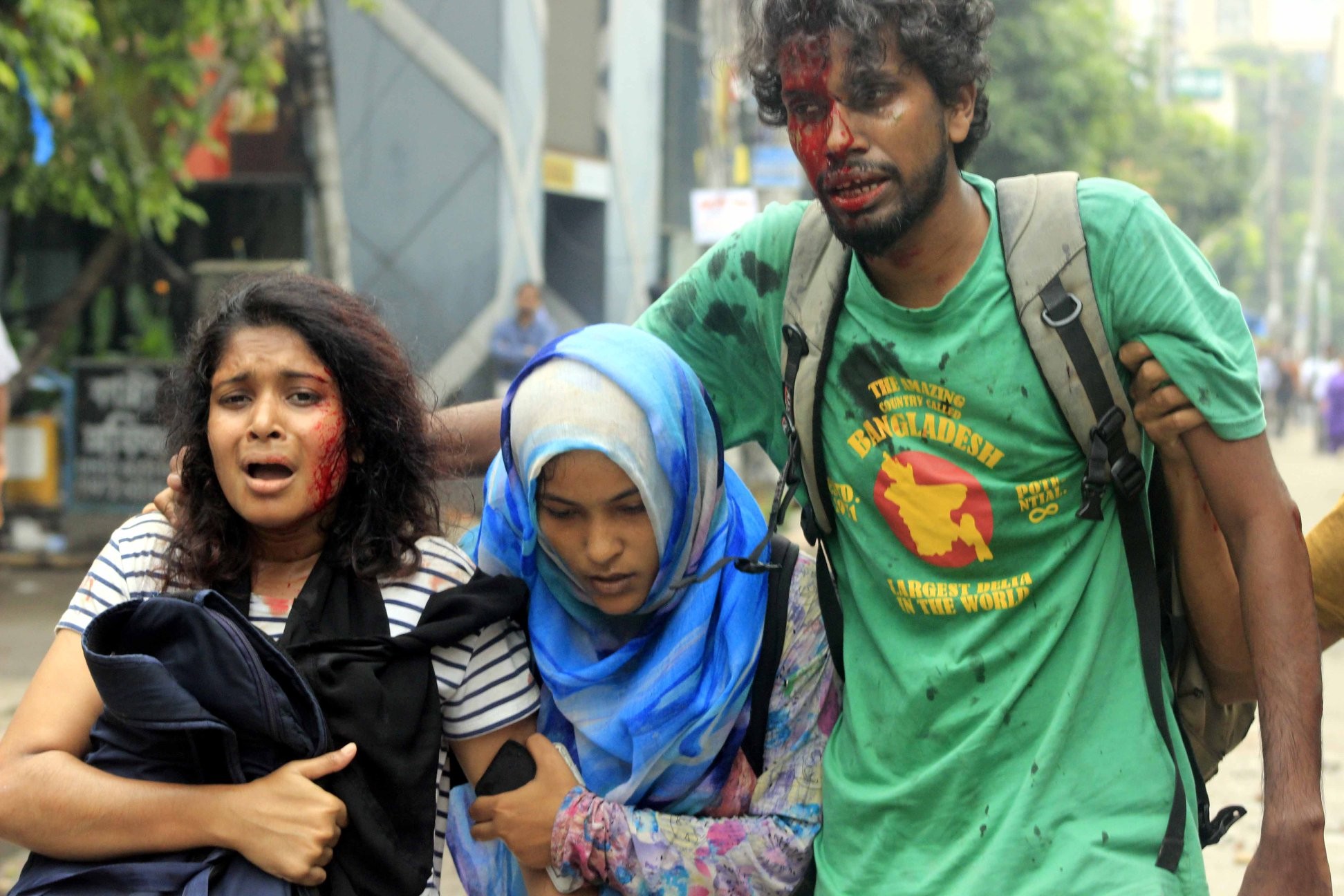 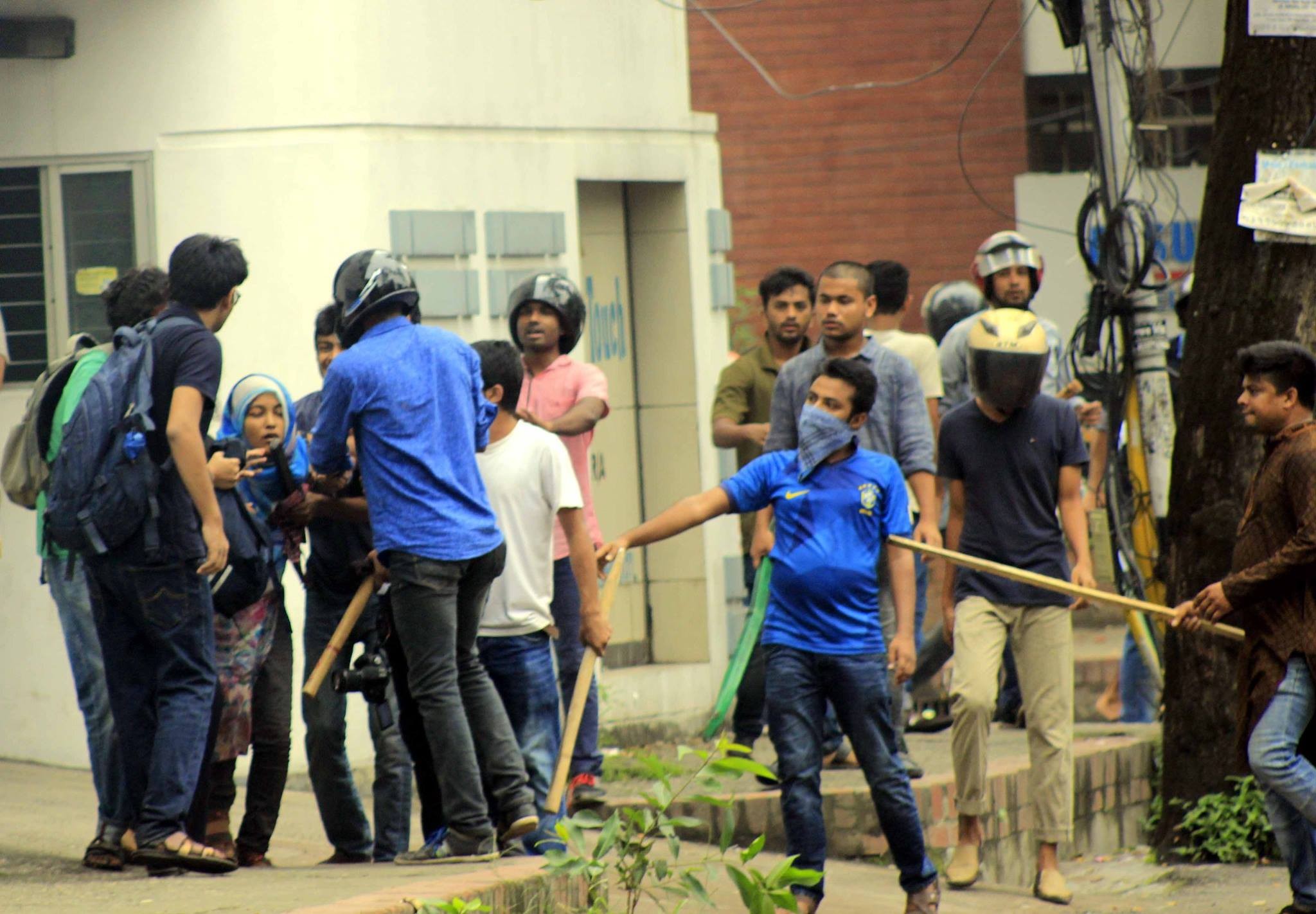 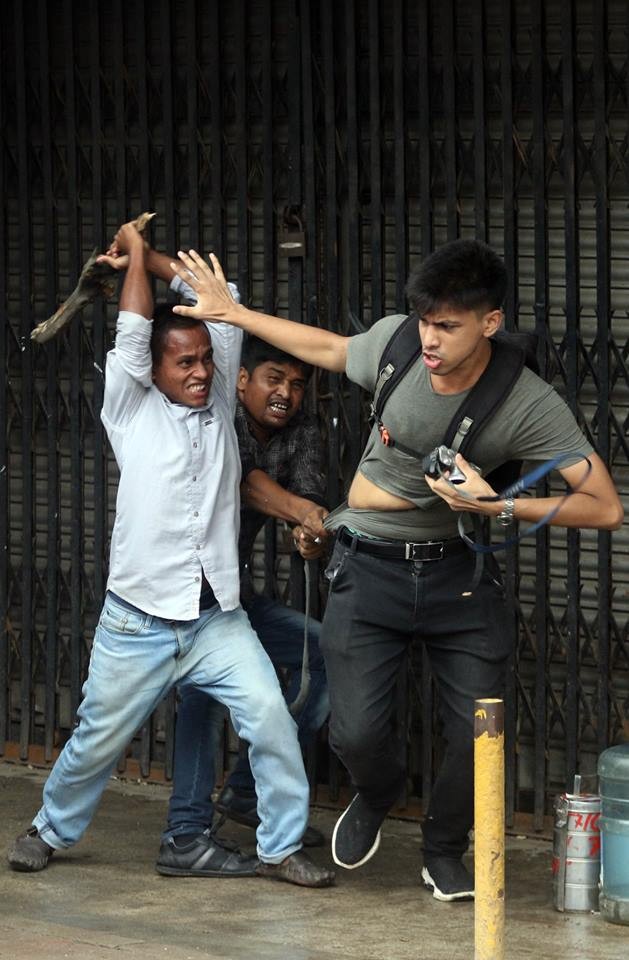 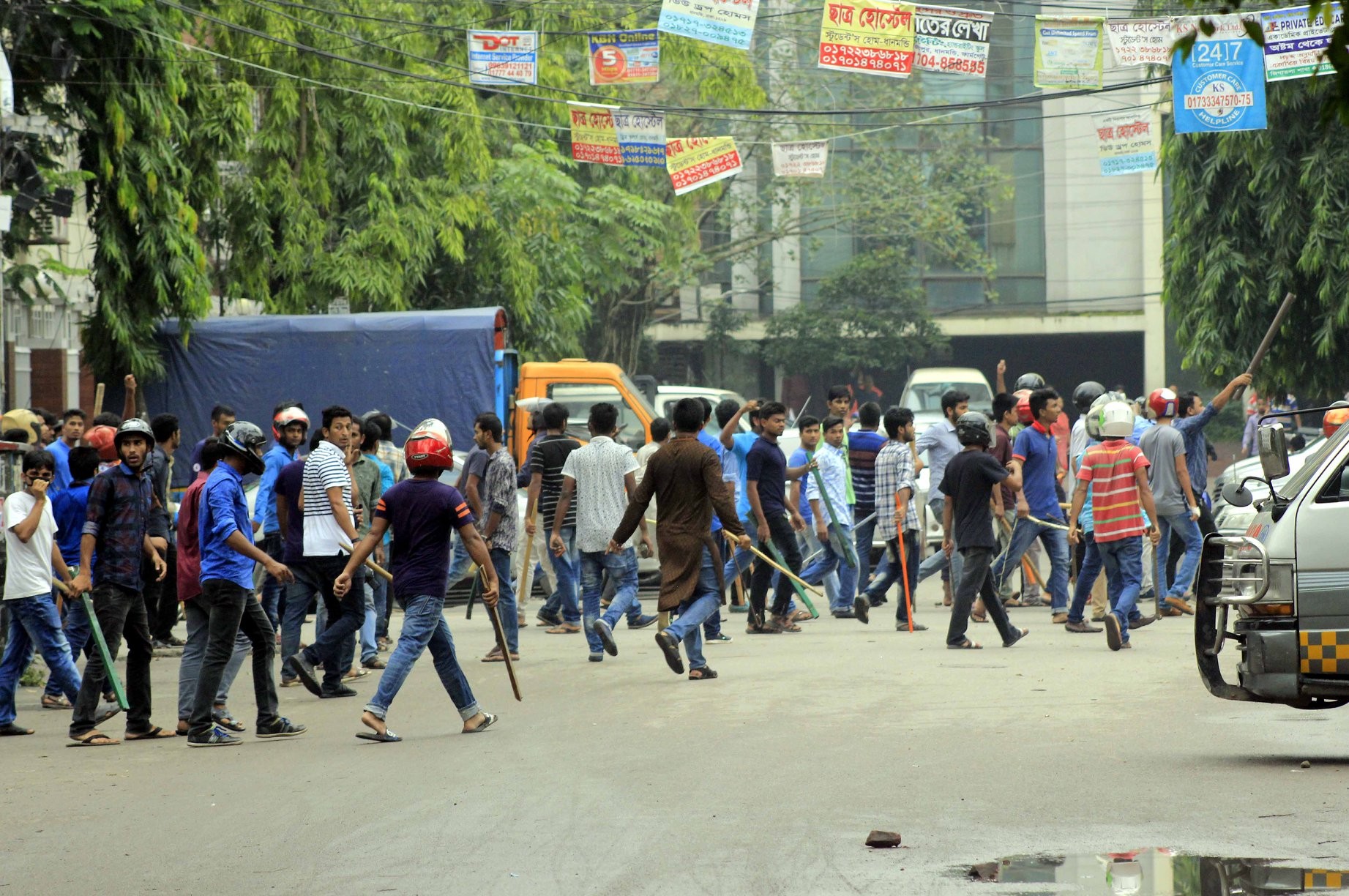 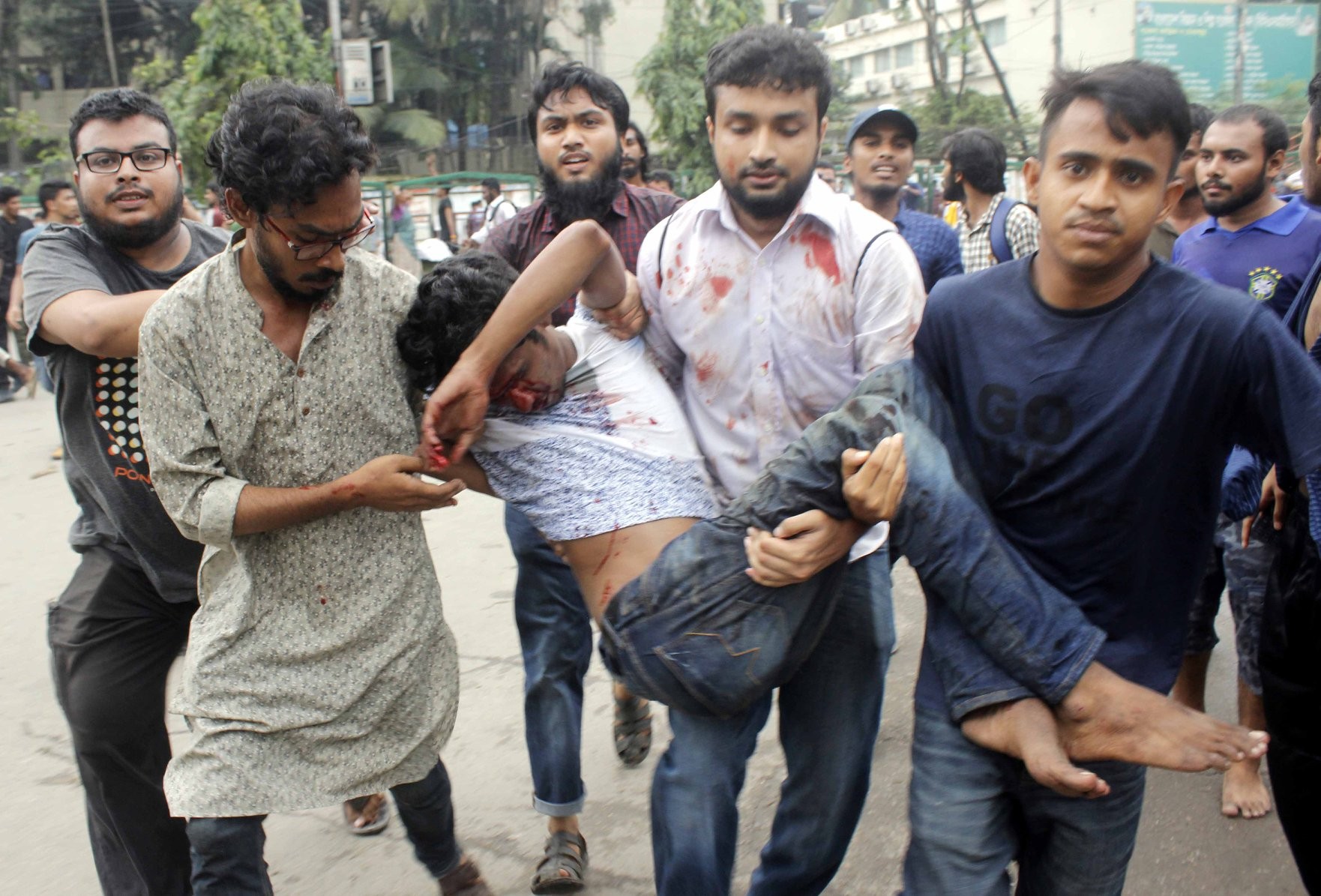 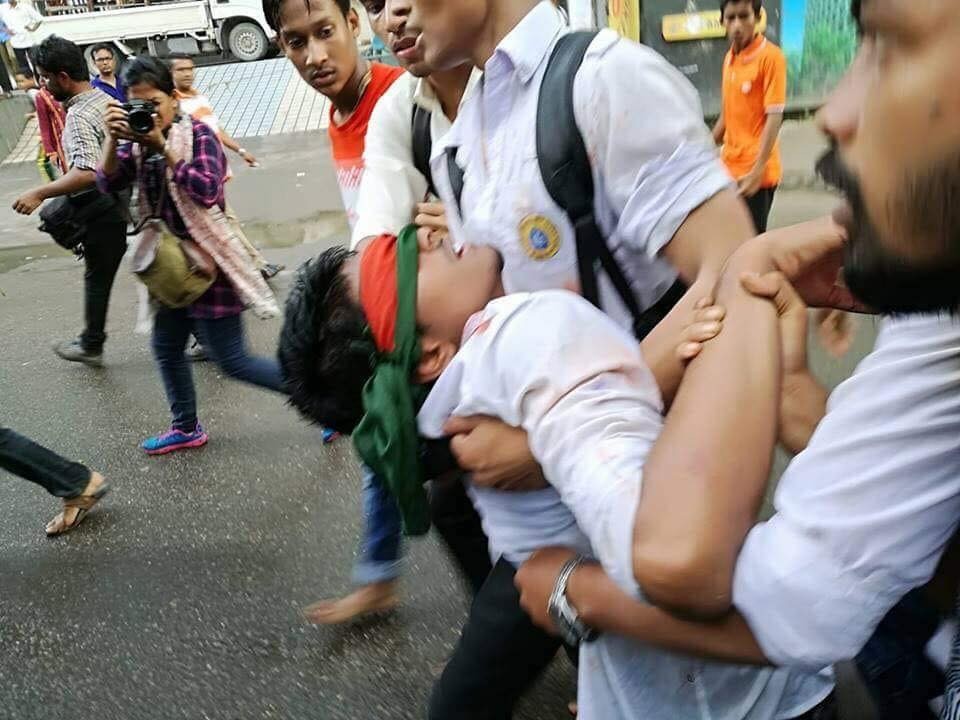 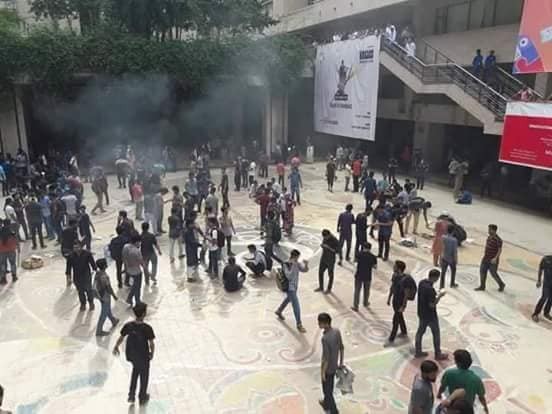 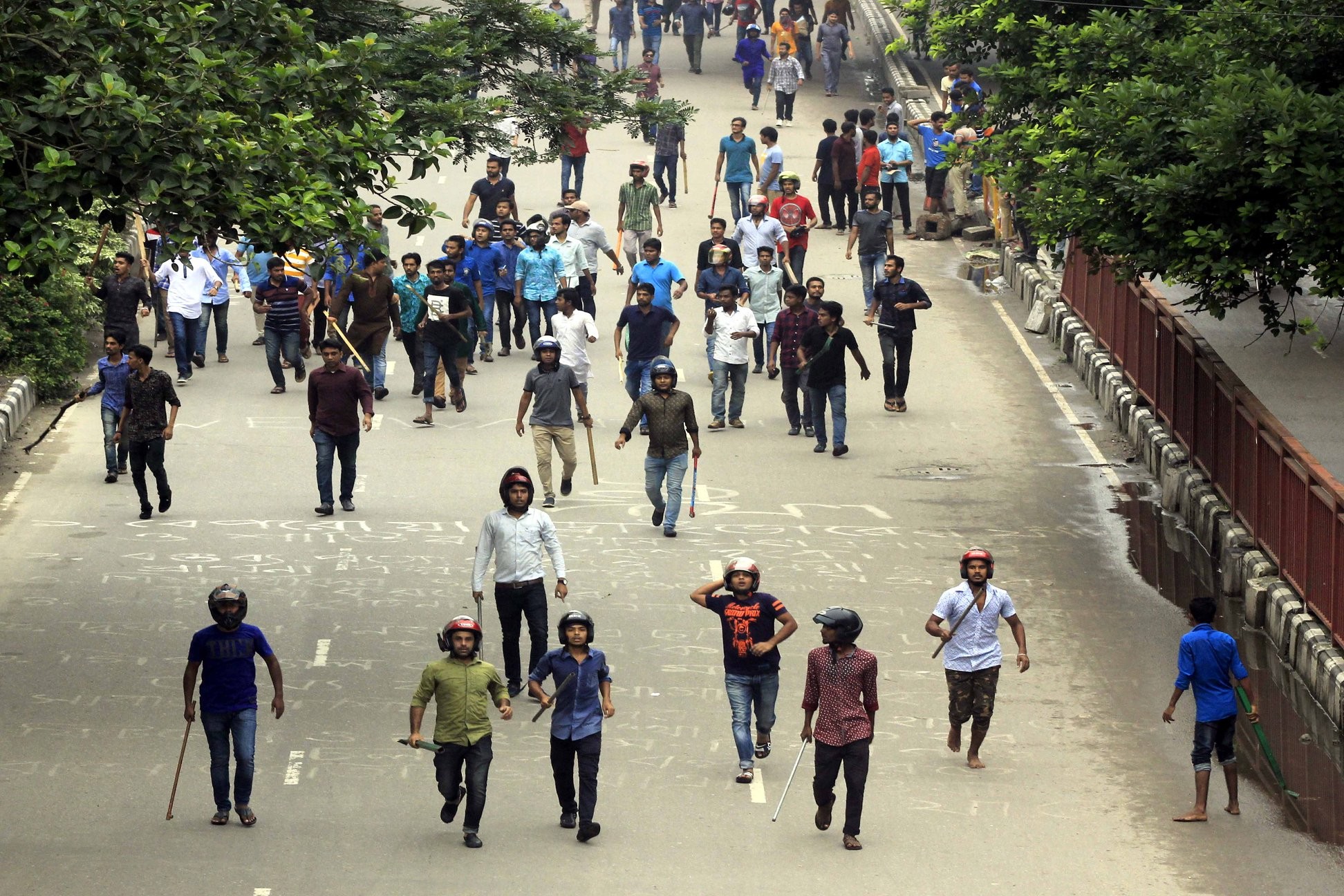 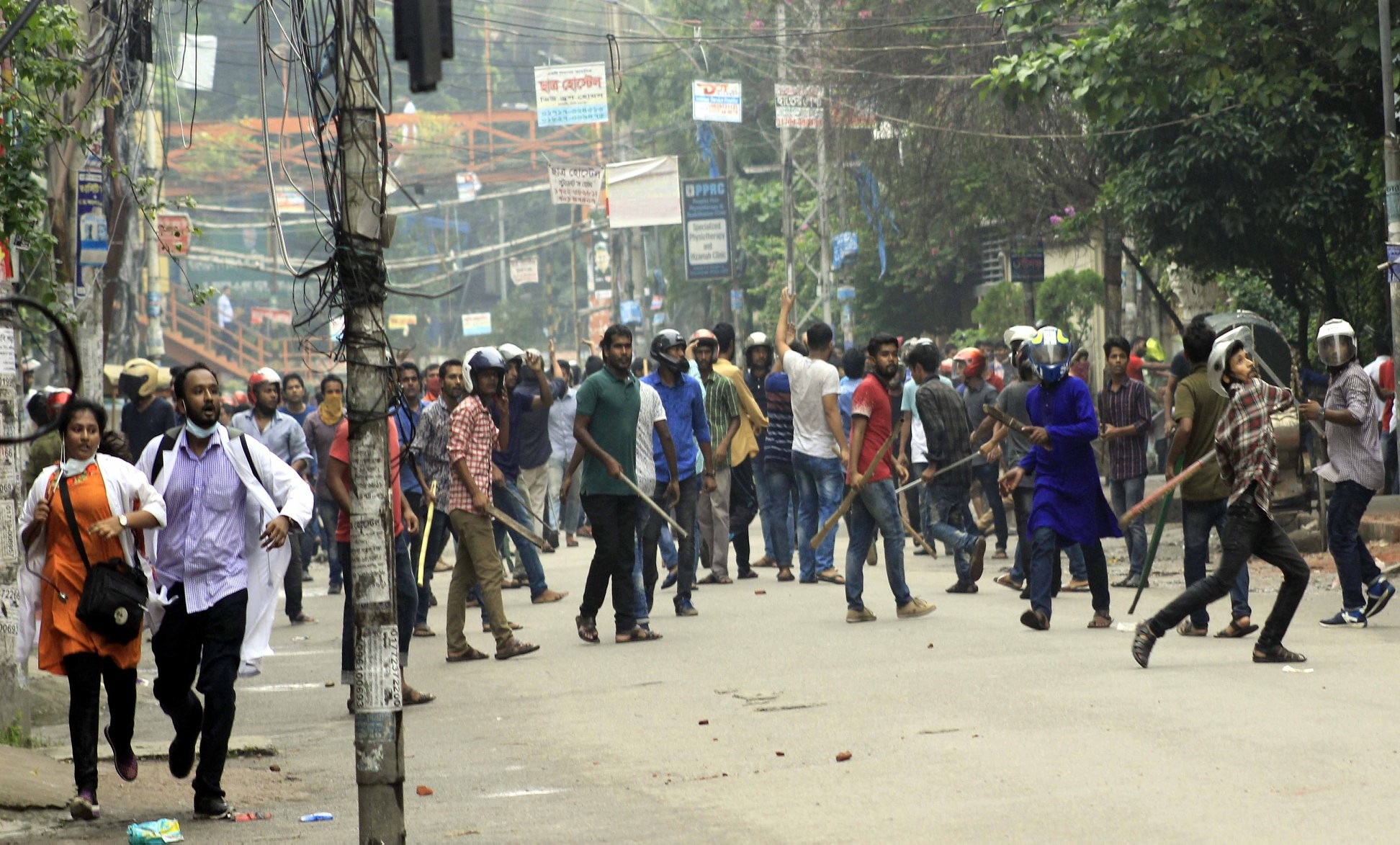 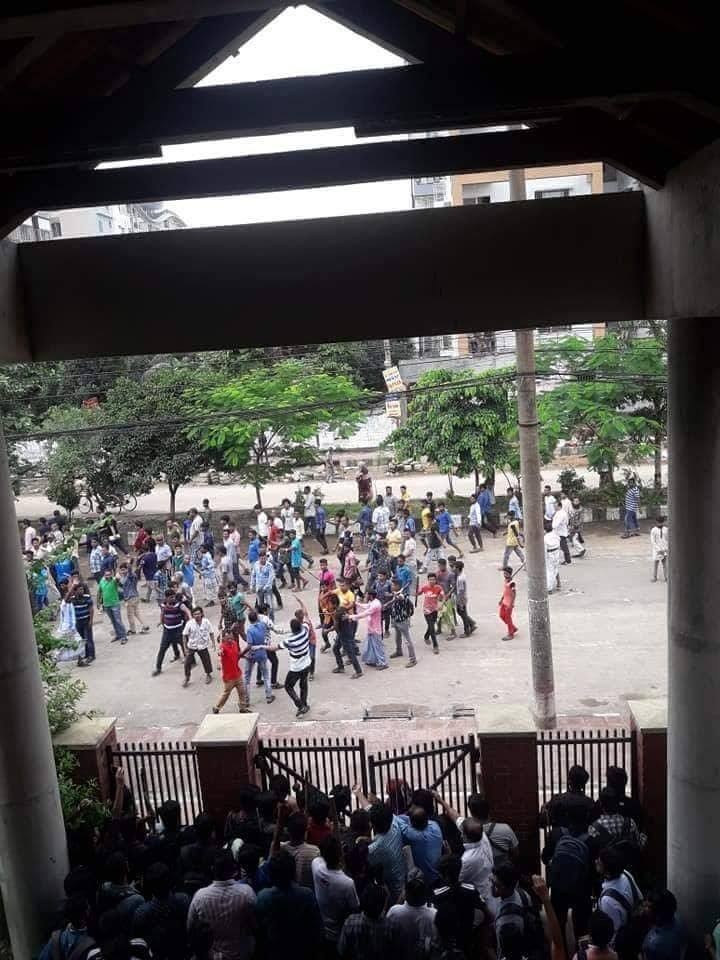 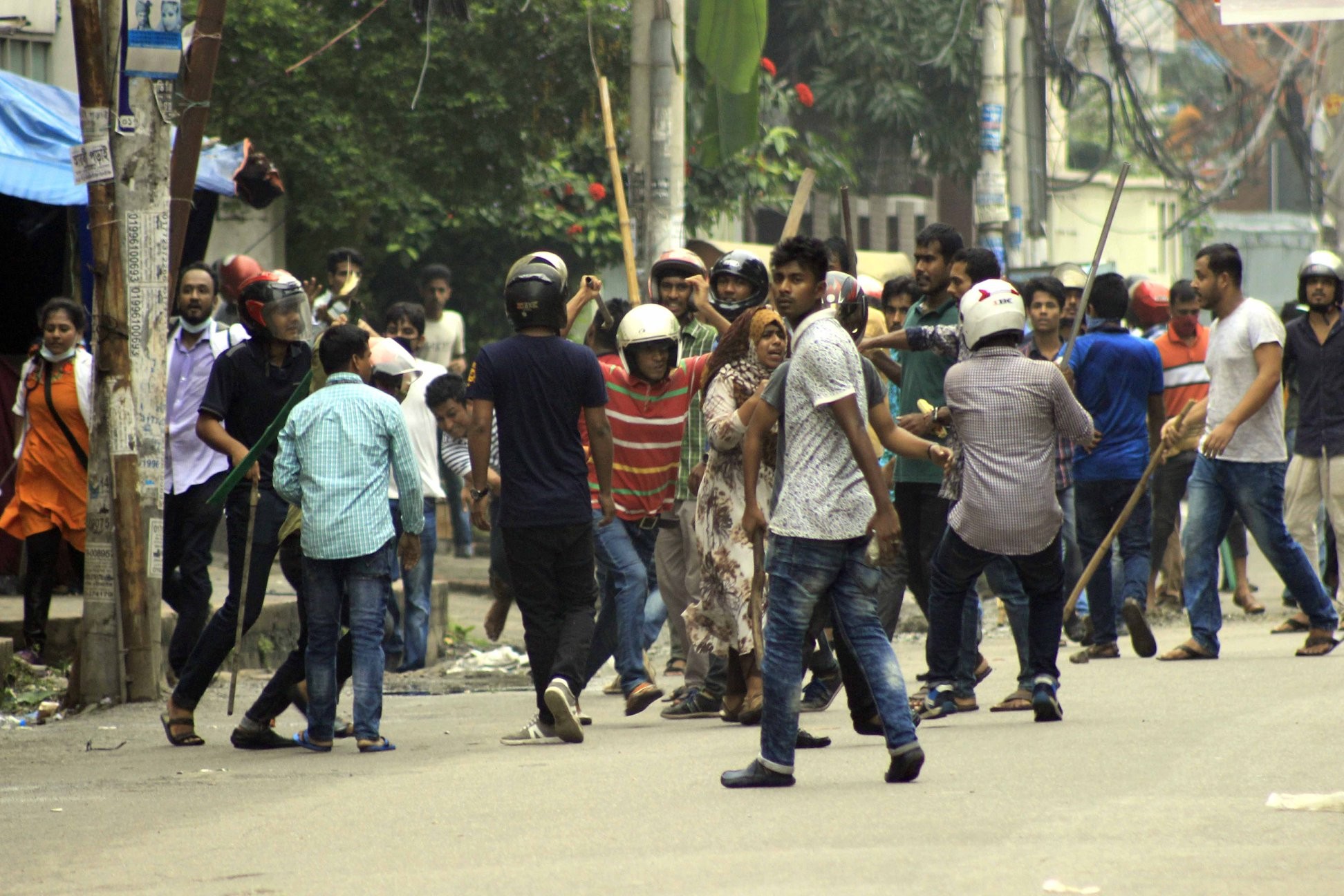