Is trickle-down really trickle-out? Trickle-down economics has been lauded as a good way to run the economy for decades by Republican party leaders.  Libertarians, and various executives that have spoken on the issue as well. Is it good for the economy? Looking at recent analysis it is clearly not the panacea espoused by its advocates. 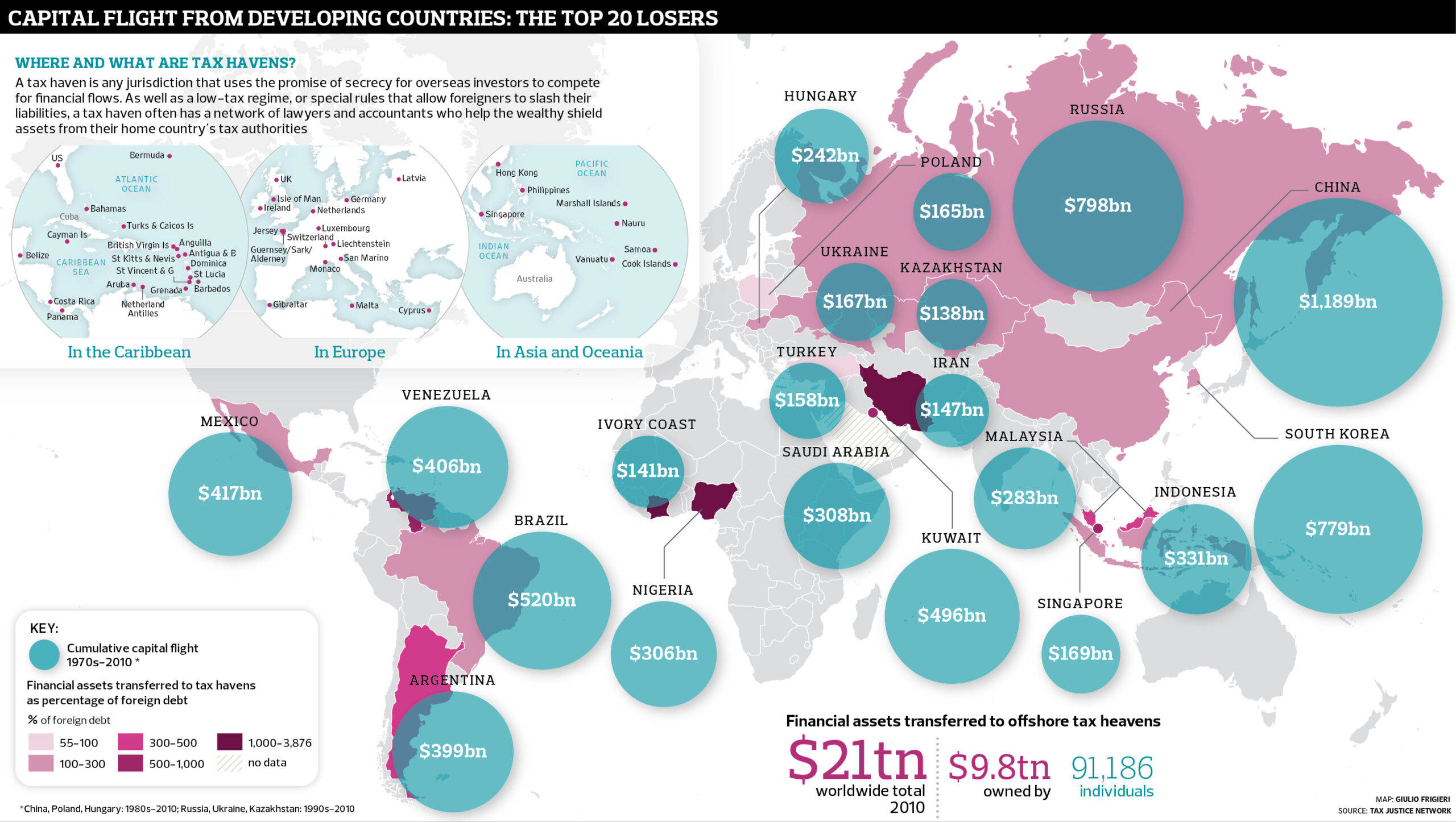 On July 21, 2012 the Business Editor of the Guardian reported research revealing that Wealth doesn’t trickle down – it just floods offshore, and that it has done so to the tune of 21 to 32 trillion dollars.

When a theory is sold to us, the public, it usually comes complete with accolades and claimed benefits. You couldn’t really sell it without a few pretty bows and some nice wrapping paper. But once you untie the bow and tear off the paper what you have left ‘is what it is’. So maybe we need to better understand what’s in the box.

And what do we find here?

The product, ‘Tricke-down economics’ is not what we are told. This should come as no surprise to consumers that have become accustomed to ‘not’ getting what they think they bought. The glamor of advertising is rarely representative of the product these days. And the advertising is becoming increasingly sophisticated.

Trickle-down Economics has been referred to as a straw-man argument. by economist George Reisman – a proponent of tax cuts, who said: “The only alternative to improvement for all, through economic progress, achieved in this way, is the futile attempt of some men to gain at the expense of others by means of looting and plundering. This, the loot-and-plunder theory, is the alternative advocated by the critics of the misnamed trickle-down theory.” [Capitalism: A Treatise on Economics. p. 308. ISBN 978-0915463732.]

People that work for a living can earn money. But money gained by market manipulation, special interest influence on politicians and legislation, oligopoly, anti-trust violation, and ideological proponents pushing market philosophy to those willing receptors pre-prepared to buy into something that for the most part won’t enrich their lives, but rather enrich those that are pushing the philosophy…

What is this really about? The ‘American Dream‘ of course. The largely neoconservative and sprinklings of Libertarian ideology is used to barrage our senses and sensibilities. Your emotions, your sense of patriotism, your sense of reason. It’s all about profit and loss. Profit for corporations and loss for America. The side benefit is that the corporations are at least skilled at deluding you into ‘thinking’ that you are benefiting.

Well, now I’ve done it. I just opened a can of worms. Better explain that now.

The result of buying into this delusion is that we tend to identify with the villain because the villain is portrayed as the hero, and in America, wealth has become the representation of the American Dream instead of what it used to be, honest hard work and individual innovation. This is a trick. It’s important that we realize we are being tricked. Otherwise we will buy the delusion and the result will be less and less access to the American Dream.

By using an Appeal to Emotion (argumentum ad passiones) and in fact ‘appeal to patriotism’, which is a form of Argument from Reason these political advertisements, in the name of America, do serious damage to the idea of what America is really all about. Freedom without responsibility is a form of anarchy. For anyone to release such a misleading advertisement goes against the principles upon which our country was founded.

…sold to less rich people, by rich people, in the same manner Christmas was sold to New Yorkers so they would not riot again, as they did in the winter of 1828.

It’s an interesting trick they are preforming though, and that is what this article is about. People push ideas that support making the wealthy wealthier without earning their money and then use that ill gotten gain to market a philosophy to create a group mentality around the idea that we all need to protect ‘their’ wealth; and suddenly a bunch of people that do not get to share in the wealth are actually supporting the idea that wealthy folks need to be wealthier. It seems somehow we are tricked into thinking either we too can become wealthy like the wealthy people (statistically improbable and increasingly impossible) or that the wealthy people somehow like us, just because we are willing to enjoy the trickle down ideal they are selling us.

And what’s really interesting if you peel more layers off this onion is that apparently what they are telling us is not what they are selling us. Here’s what’s really in the box: Such methods amount to the notion that it ‘is’ American to ‘sell out’ America. Keep peeling that onion though, there’s more…

Oh my, that tricke down feeling…

Psychologically people somehow get this ‘trickle-down feeling’, or so it seems. They feel as if they are part of the wealthy club because they are willing to ‘believe’ in what the wealthy people are telling them.

…how ‘American’ it is to gain through various forms of corrupt advantages that are less than ‘fair & objective’ and then take the gains and export them out of America thus reducing Americas wealth and strength?

Tricke Down Make you Poor, NOT Rich

What the poor, middle class, and even upper-middle class don’t seem to realize is that it makes them either more poor, or it diminishes their access to the American Dream. In effect this means that the wealthiest folks that participate in promoting this to America are monopolizing the American Dream. Said another way, they want to keep it for themselves and make you think that you’re part of their reality. But the vast majority of Americans are not wealthy, are not in that category, and are not actually benefiting from the Red Herring salad they are feeding us.

Many Americans, like myself and many people I know, still believe we should work for a living to earn our money rather than gain wealth by controlling politicians and market systems. That’s because those that believe in the original American Dream tend to have ethics.

The trickle-down economics dream does not enrich the ones buying into the new Hollywood fantasy version of the American Dream though. It increases corporate socialism through concentration of power and/or market manipulation allowed by deregulation of the market system, which allows market bubbles that are not very good for our economy.

The Real Results of Trickle Down…

Now follow this chain slowly to see what it means: The result of trickle-down is they not only keep as much cash as they can, that some or even many didn’t actually earn, but a lot of that cash comes from your pocket, because as the middle class erodes with reduced upward mobility, and drops in discretionary spending, due to the continued export of ill-gotten wealth gained through market and political manipulation, ‘we the people’ have to pick up the slack and fill the hole they leave behind. Keep in mind that a lot of corporations are getting money, contracts, and favors from the government through tax-breaks,  subsidies, and cronyism that is largely impossible to track.

The flooding out of cash goes to safe tax havens overseas. Just ask President Obama and Mitt Romney how much money they are keeping overseas. Which one do you think has more money overseas? And ask yourself how ‘American’ it is to gain through various forms of corrupt advantage that are less than ‘fair & objective’, take the gains, and export them out of America, thus reducing Americas wealth and strength?

…that are hiding behind the meme of Americana to facilitate, knowingly or not, the export of wealth from America (while hiding their donors) will say that it is unAmerican not to support the ideas they are selling you.

Trickle-down Economicshas been sold to less-rich people, by the most-rich people, in the same manner Christmas was sold to New Yorkers so they would not riot again, as they did in the winter of 1828.

Don’t just jump to a conclusion.

Ask yourself thoughtfully and do some research on the data. Why is America where it is right now? What if we had say an extra 5 or 10 or even 20 trillion dollars circulating in our economy to help with productivity, business growth, education, training and advancement? What if?

…that are hiding behind the meme of Americana to facilitate, knowingly or not, the export of wealth from America (while [some are even] hiding their donors)… they will say it is unAmerican ‘not’ to support the ideas they are selling you. These very same people are the ones exporting American dollars in the million and even billions, and adding up to trillions. And apparently significant portions of those dollars are our tax dollars for government projects won by manipulation of the political process.

Political manipulation and special interest influence is ‘not’ capitalism.

While I may disagree with my uncle George Reisman (Author of CAPITALISM and who actually worked with one of my favorite authors Ayn Rand) that ‘generally’ reducing taxes on ‘the wealthy’ is the best answer in our current economic and sociopolitical situation (see 2012 BIS report and $10 Million a Minute articles), one can see that competitive tax structures for corporations, as opposed to tax avoidance and subsidy in relevant related areas can be more boon than bane for the general economy; and favorable when responsibly regulated so as to avoid the tragedy of the commons. Specifically pertaining to reducing and eliminating the avoidance of ‘externalized costs’ typically pushed onto the tax-payer through general taxes (see ‘Externality‘ and ‘Cost Externalizing‘).

Let’s not forget the political corruption behind this:

The continued manipulation of politicians that have their hands on the money spigot of National and State government, along with the ability of special interests to manipulate campaigns and influence politicians, unduly feeds this loot-and-plunder reality.

…is not just a problem of ethics, this is about the security of our nation.

Some will argue that they ‘earned’ that money. In some, or even many, cases this assumption is true, but increasingly corporations intentionally manipulating how the public perceives reality do this to their own favor, not the favor of ‘the people’ they are ‘tricking’. Therefore, we the people need to know who is really benefiting from such nefarious methods as used in these types of political ads.

Political manipulation and special interest influence is ‘not’ capitalism. It supports oligarchyand plutocracy. Such practices do not promote freedom and liberty, and historically have led to extreme exploitation of peoples and nations, and as history has demonstrated, even the fall of empires and nations.

If we want a healthy economy in America, if we want to rebuild and strengthen the American Dream, then we need to see about stopping the trickle-out or flooding-out of Americas wealth. Sticking a finger in a dyke isn’t going to do it. We need to reexamine how things work. The continued export of wealth from America by the richest of those that may have attained such wealth by such ill gotten means as special interest influence and market manipulation, that is inconsiderate of the country, the people, or the commons, is not just a problem of ethics, this is about the security of our nation.

And, btw…, here’s a link to one source of the historic tax rates;

Rich this is very valuable information and thank you for that.

Many things have fundamentally changed. It seems that too many are more interested in self than community and taking rather than earning and giving. All this while so many claim the virtues that are quite the opposite of their actions.

Let us hope the greatest generations are ‘not’ only behind us but rather yet to come.