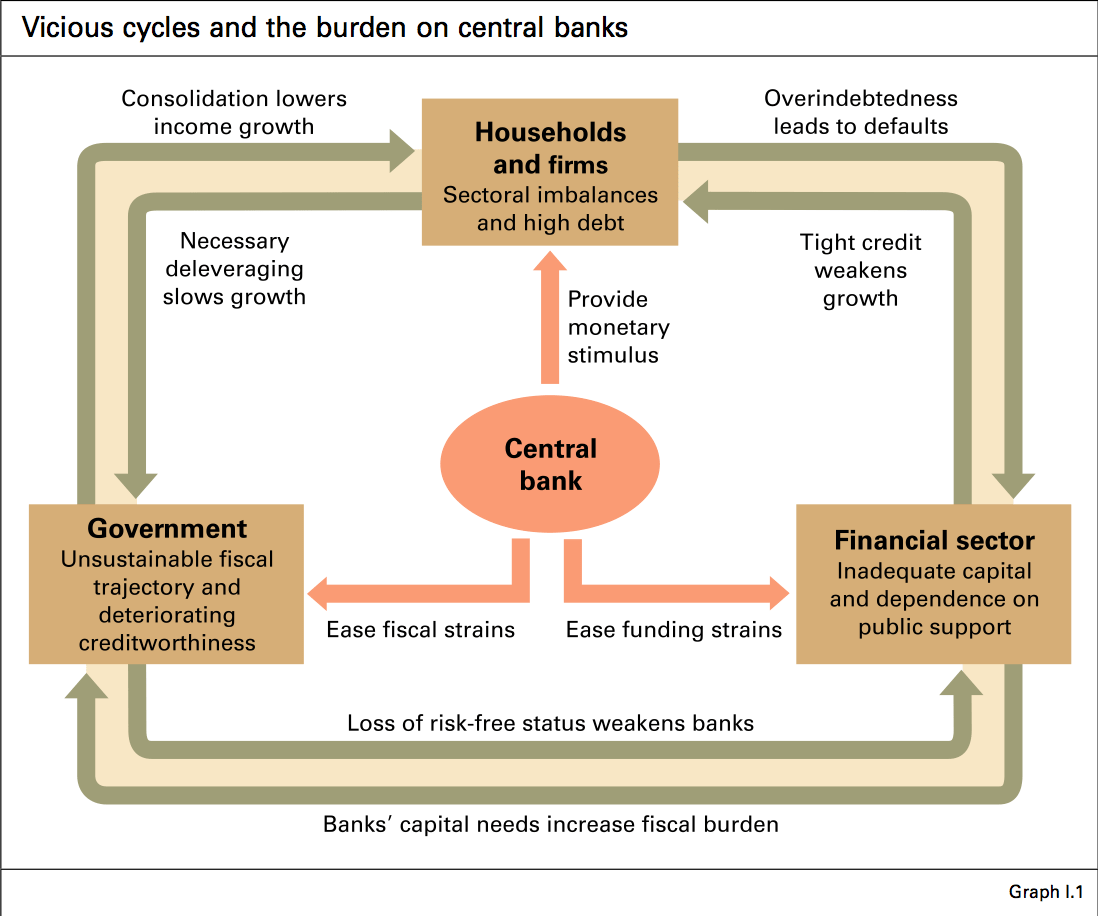 The Bank for International Settlements (BIS) annual report was issued on 24 June 2012. The report highlights the cycles of interconnected economic functions that are negatively influencing the ability of the system to stabilize and move toward a healthier economic function. Structural challenges remain in advanced and emerging markets. Monetary policy remains accommodative at the risk of future financial and price instability. Market confidence remains an issue.

Overview of the economic chapters

Chapter I: Breaking the vicious cycles

The global economy has yet to overcome the legacies of the financial crisis to achieve balanced, self-sustaining growth. In different ways, vicious cycles are hindering the transition for both the advanced and emerging market economies. After reviewing the past year’s economic developments (Chapter II), the economic chapters address fundamental aspects of these vicious cycles: unfinished structural adjustments (Chapter III), risks in the current stances of monetary (Chapter IV) and fiscal policy (Chapter V), and the ongoing challenges of financial reform (Chapter VI). Chapter I underscores the themes and policy conclusions of the latter four chapters, and in a special section examines them in the context of problems in Europe’s currency union.

Chapter II: The year in retrospect

In the advanced economies, the first months of 2011 seemed to offer the beginnings of a self-sustaining recovery, a promise that turned out to be a false dawn. The pattern appears to be repeating itself in 2012, with early signs of strength gradually fading. The same set of hindrances has been at work in the past two years. The crisis exposed the weak foundations of government finances. With budgets in disarray, fiscal authorities have been forced to make deep budget cuts at the same time as other sectors of the economy continue to deleverage. In the euro area, the evolution of fiscal strains into a sovereign debt crisis has severely undermined the confidence of investors and consumers inside and outside the monetary union. Losses on sovereign bonds have led many banks to cut lending, thereby further weakening the recovery. Meanwhile, many emerging market economies have begun to see their previously vigorous rates of economic activity drop off.

Both advanced and emerging market economies face structural challenges. Sectoral misallocations that built up during the boom, coupled with high levels of household and corporate debt, continue to hobble growth in some advanced economies. These countries must move to repair balance sheets as they facilitate the rebalancing of resources across sectors. Meanwhile, a number of other countries, including many emerging market economies, face the risk of experiencing their own version of the recent boom and bust cycle. Their rebalancing requires shifting from credit expansion and exports towards internal sources of growth, especially as growth models that mainly rely on exports are likely to be less effective than in the past.

The major advanced economies are maintaining extraordinarily accommodative monetary conditions, which are being transmitted to emerging market economies (EMEs) in the form of undesirable exchange rate and capital flow volatility. As a consequence of EME efforts to manage these spillovers, the stance of monetary policy is highly accommodative globally. There is widespread agreement that, during the crisis, decisive central bank action was essential to prevent a financial meltdown and that in the aftermath it has been supporting faltering economies. Central banks have had little choice but to maintain monetary ease because governments have failed to quickly and comprehensively address structural impediments to growth. But the need for prolonged accommodation has to be carefully weighed against the risk of generating distortions that will later produce financial and price instability.

Sovereigns under fiscal pressure have been losing their risk-free status – and the accompanying economic benefits – at an alarming rate. The broad availability of safe assets aids the operation of financial markets and the conduct of monetary policy. And a sovereign whose debt is essentially free of credit risk has ample room to implement counter-cyclical policies to support macroeconomic stability. Restoring the supply of risk-free assets requires that governments convincingly address high deficits as well as projected increases in their long-term liabilities. Some countries need to take immediate action to significantly reform their public sectors and remove structural impediments to growth. All countries need to prevent adverse feedback loops between the financial sector and the sovereign and build up fiscal buffers in good times.

Banks and prudential authorities still face tough challenges in securing financial stability. Banks need to further strengthen capital and liquidity positions to regain markets’ confidence. To expedite this process, authorities should ensure that institutions recapitalise and recognise losses on problematic investments. Authorities everywhere must complete their consistent and timely implementation of the agreed Basel III standards and ensure that robust regulation extends to currently unregulated intermediaries. Meanwhile, regulators in rapidly growing economies should be aware of the potentially destabilising risk-taking encouraged by buoyant local markets. The long-term objective of policy must be to pave the way to a robust business model of banking featuring strong and transparent balance sheets, self-sustaining international operations, and stable profits that do not rely on official support.