The CATO Institute: “With All Due Respect” 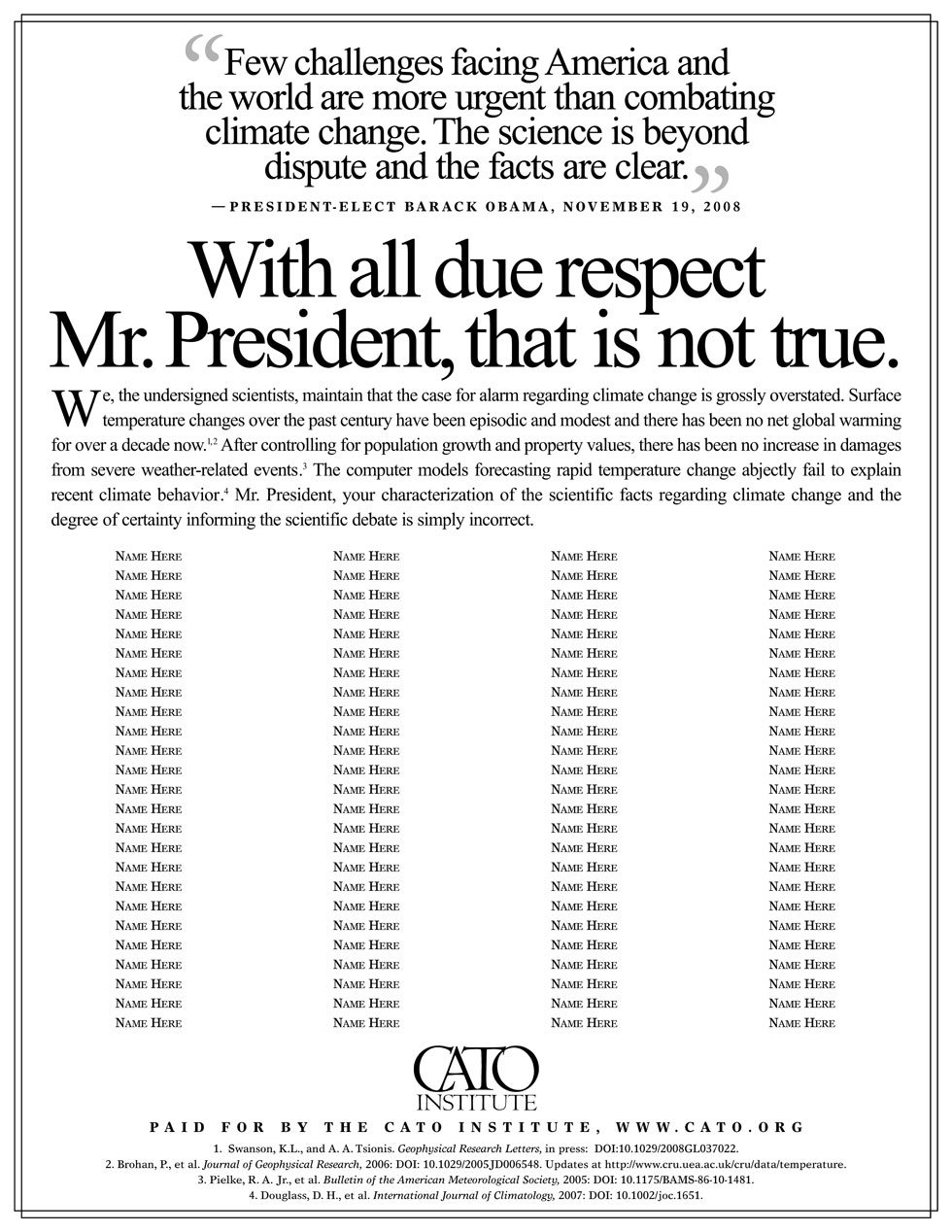 How wrong can they (The CATO Institute) be, let us count the ways… A funny thing happened on the way to create another incorrect impression about human caused global warming generated from a special interest lobby group…

They apparently made up the scientific statement before they got the scientists involved… that is funny, right?

Patrick Michaels of the Cato Institute presented testimony to a ‘The Committee on Energy and Commerce‘.

The first interesting point is that the CATO Institute apparently created the ‘scientific statement’ before they got any scientists to sign the statement? That’s funny.

But if they don’t have the names of the scientists yet, then how did they come up with the scientific statement? Maybe they made it up based on their special interest agenda?

This is the way propaganda works of course. It is a sad statement about the CATO Institute and surely they will lose any respect they may have had in providing objective reasoning and their reputation as a think tank will falter.

Maybe they will become better known for what they appear to be: a special interest propaganda machine.

“We, the undersigned scientists, maintain that the case for alarm regarding climate change is grossly overstated. Surface temperature changes over the past century have been episodic and modest and there has been no net global warming for over a decade now. 1,2 After controlling for population growth and property values, there has been no increase in damages from severe weather-related events. 3 The computer models forecasting rapid temperature change abjectly fail to explain recent climate behavior. 4 Mr. President, your characterization of the scientific facts regarding climate change and the degree of certainty informing the scientific debate is simply incorrect.”

At the bottom of the page, they refer to 4 scientific references to support their statement. Unfortunately, none of them support the statement. How wrong can the CATO Institute be? Apparently, completely wrong.

Let’s take a look at their scientific references:

“Of these papers, not one has the evidence to support the statements attributed to them in the main text.”

Of the four papers used as references, none of them support the statement they are making. But how would the public know that? The public and the denial machine would just spread around the statement and claim that ‘proves’ this global warming is not human caused.

“The use of the recent Swanson and Tsonis paper is simply opportunism. Those authors specifically state that their results are not in any way contradictory with the idea of a long term global warming trend. Instead they are attempting to characterise the internal variability that everyone knows exists.”

“Instead this is a classic red-herring: Ignore the facts you don’t dispute, pick some others that are ambiguous and imply that, because they are subject to some debate, we therefore know nothing. Michaels (and Cato) presumably thinks this kind of nonsense is politically useful and he may be correct. But should he claim it is scientifically defensible, we would have to answer:”

“With all due respect, Dr. Michaels, that is not true.”