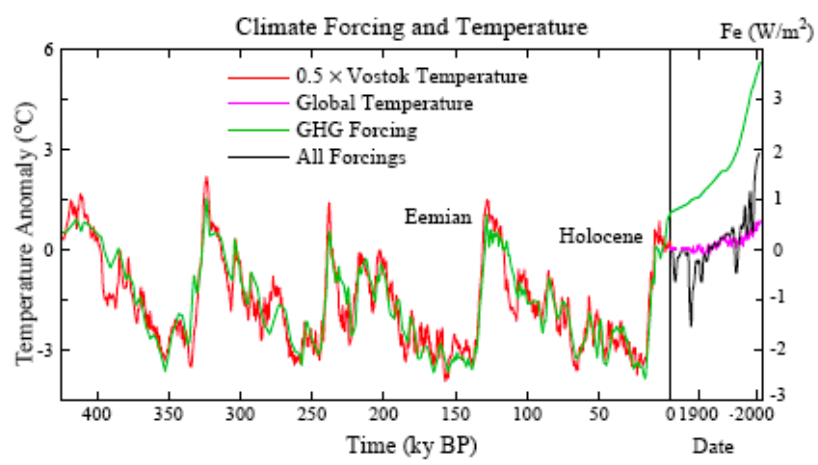 Well, considering the political climate, it's more of an idea...

The numbers being discussed for target atmospheric Co2 are between 450 and 550 ppm (parts per million). We are currently at 385ppm CO2 (in 2008). The “Target Atmospheric Co2” paper clearly shows based on the evidence that everything is going faster than expected regarding global warming and its effects. Interpreted, that also means that humankind needs to reconsider it’s action plan regarding our relationship with the global climate.

Climate Forcing and Temperature – The natural cycle is illustrated in comparison to the human cased forcing.

Main Image – Global temperature (left scale) and GHG forcing (right scale) due to CO2, CH4 and N2O from the Vostok ice core. Ratio of temperature and forcing scales is 1.5°C per W/m2. The time scale is expanded for the industrial era. Modern forcings include human-made aerosols, volcanic aerosols and solar irradiance. GHG forcing zero point is the mean for 10-8 ky before present. Net climate forcing and modern temperature zero points are at 1850.

The draft of “Target Atmospheric CO2: Where Should Humanity Aim?” summarizes the current knowledge of past climate in perspective of current climate through observations and measurements of earths climate history.

While the political/special interest arguments are played out on the media stage, the science argument (re. human caused) is settled.

The team has put together the case to show the science of known past climate and forcings comparing past effect to today. The picture is quite clear. Humans have changed the climate system of earth through industrial process and GHG (greenhouse gas) output, and we need to reduce Co2 output.

Equilibrium sea level rise for today’s 385 ppm CO2 is at least several meters, judging from paleoclimate history. Accelerating mass losses from Greenland and West Antarctica heighten concerns about ice sheet stability. An initial CO2 target of 350 ppm, to be reassessed as the effect on ice sheet mass balance is observed, is suggested.

Even stopping all GHG output now would not stop the earth from continuing to warm. This is due to the oceans slow thermal inertia that will take time to absorb all the forcing energy mankind has placed in the system.

Coral reefs are suffering from multiple stresses, with ocean acidification and ocean warming principal among them. Given additional warming ‘in-the-pipeline’, 385 ppm CO2 is already deleterious. A 300-350 ppm CO2 target would significantly relieve both of these stresses.

Many lately have raised the argument that it doesn’t matter if it is human caused or natural. That is an incorrect assumption. Human caused means human behavior. Sine it is our behavior in energy use, we can change our behavior.

Stabilization of Arctic sea ice cover requires, to first approximation, restoration of planetary energy balance. Climate models driven by known forcings yield a present planetary energy imbalance of +0.5-1 W/m2, a result supported by observed increasing ocean heat content. CO2 amount must be reduced to 325-355 ppm to increase outgoing flux 0.5-1 W/m2, if other forcings are unchanged.  A further reduced flux, by ~0.5 W/m2, and thus CO2 ~300-325 ppm, may be needed to restore sea ice to its area of 25 years ago.

The main goal is balance. Individual awareness of the cause will lead to behavior changes and influence of our leaders to make smarter policy choices.

Alpine glaciers are in near-global retreat. After a flush of fresh water, glacier loss foretells long summers of frequently dry rivers, including rivers originating in the Himalayas, Andes and Rocky Mountains that now supply water to hundreds of millions of people. Present glacier retreat, and warming in the pipeline, indicate that 385 ppm CO2 is already a threat.

How much does it matter? Since it is clear that this problem has potential to actually get out of control, it matters a lot.

Co2 at 385ppm (where we are today 105ppm above preindustrial levels) is already causing large problems. It is becoming increasingly clear that higher levels will exponentially increase the problems.

Coal is the largest reservoir of conventional fossil fuels, exceeding combined reserves of oil and gas. The only realistic way to sharply curtail CO2 emissions is to phase out coal use except where CO2 is captured and sequestered.

These things are quite clear.

What can we do?

America is already using 7% renewable energy; we need to increase that number. New energy systems will take time to develop though so reducing power consumption is our first line of defense.

We need to ignore the political/special interest arguments

Talk to and write your friends, congressman, senators and local representatives. Special interests have used the same tactics of ambiguity and disinformation throughout history. We need to ignore the political/special interest arguments and limit our view to the science. Learn more and share what you learn.

Humanity today, collectively, must face the uncomfortable fact that industrial civilization itself has become the principal driver of global climate.  If we stay our present course, using fossil fuels to feed a growing appetite for energy-intensive life styles, we will soon leave the climate of the Holocene, the world of human history.  The eventual response to doubling pre-industrial atmospheric CO2 likely would be a nearly ice-free planet.

Humanity’s task of moderating human-caused global climate change is urgent.  Ocean and ice sheet inertias provide a buffer delaying full response by centuries, but there is a danger that human-made forcings could drive the climate system beyond tipping points such that change proceeds out of our control.

We suggest an initial objective of reducing atmospheric CO2 to 350 ppm, with the target to be adjusted as scientific understanding and empirical evidence of climate effects accumulate. Limited opportunities for reduction of non-CO2 human-caused forcings are important to pursue  but do not alter the initial 350 ppm CO2 target.  This target must be pursued on a timescale of  decades, as paleoclimate and ongoing changes, and the ocean response time, suggest that it would be foolhardy to allow CO2 to stay in the dangerous zone for centuries.

Present policies, with continued construction of coal-fired power plants without CO2 capture, suggest that decision-makers do not appreciate the gravity of the situation.  We must begin to move now toward the era beyond fossil fuels.  Continued growth of greenhouse gas emissions, for just another decade, practically eliminates the possibility of near-term return of atmospheric composition beneath the tipping level for catastrophic effects.

The most difficult task, phase-out over the next 20-25 years of coal use that does not capture CO2, is herculean, yet feasible when compared with the efforts that went into World War II.  The stakes, for all life on the planet, surpass those of any previous crisis.  The greatest danger is continued ignorance and denial, which could make tragic consequences unavoidable.

Editors Note: It is likely, based on what we now know, that the more appropriate target for C02 may be more towards 300ppm as that would be more inline with natural cycle. It stands to reason that prolonged exposure even to 350ppm will still have significant effects. Realistically, getting to a target of 350ppm is needed, but will take tremendous effort and will.