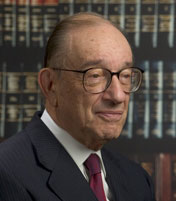 The former chair of the Federal Reserve visits Jon Stewart.

JON STEWART – My guest tonight he was the chairman of the Federal Reserve board from 1987 until 2006. His new memoir is entitled “The Age of Turbulence, Adventures in a New World”. Please welcome to the program, Alan Greenspan. An honor sir, please come and sit.  Very nice to see you sir, thank you for joining us.

JON STEWART – Alan Greenspan, an Age of turbulence. You’re here on an interesting day, the fed drops the interest a half a point, as soon as I hear that I’m thinking to myself, my god, I’ve got to get my money into… (Jon leans towards Alan to listen…)

ALAN GREENSPAN – (He leans over and says) “I can’t do that”.

JON STEWART – Son of a gun Greenspan. What is that, when they say the stock market went crazy. It went up 350 points because they lowered it a half a point.

JON STEWART – Now when you say … unexpected, it makes me wonder, is this a game then of expectation. Like if they had said man, were gonna lower this thing a point, and then they only did half a point does the market go down, even though the rate change is the same.

JON STEWART – So the fed, or whoever is leading it, could in fact, if he wanted to, goof on all of us.

ALAN GREENSPAN – He wouldn’t want to.

JON STEWART – I am? Should I leave.

ALAN GREENSPAN – No. Stay for a while. Since you got your emmy, you’re qualified. You didn’t need a central bank when we were on the gold standard, which is back in the 19th century. And all of these automatic things occurred because people would buy and sell gold and the markets would do what the fed does now. But most everybody in the world, by the 1930’s, decided that the gold standard was strangling the economy and universally this gold standard was abandoned. But, you need somebody to determine, or some mechanism of how much money is out there, because remember, the amount of money relates to the amount of inflation in an economy, and inflation…

JON STEWART – …You think I’d forget that? What are you…, sure I know that.

ALAN GREENSPAN – I just couldn’t be sure.

ALAN GREENSPAN – Splendid. In any event, the more money you have relative to the amount of goods, the more inflation you have and that’s not good so…

JON STEWART – So were not a free market then. There is an invisible, there is a benevolent hand that touches us.

ALAN GREENSPAN – Absolutely. You are quite correct to the extent that there is a central bank governing the amount of money in the system, that is not a free market and most people call it regulation.

JON STEWART – And so were really just deciding, because when you lower the interest rate and drive money to the stocks, that lowers the return people get on savings in a bank.

ALAN GREENSPAN – No, that’s the way it comes out, but that’s not the way to think about it.

JON STEWART – But explain that to me, because it seems to me that we favor investment, but we don’t favor work. The vast majority of people work. And they pay payroll taxes and they use banks and then there is this whole other world of hedge funds and short betting and it seems like craps and they keep saying, no no, don’t worry about it, it’s a free market that’s why we live in much bigger houses, but it really isn’t, it’s the fed, or some other thing, isn’t it.

ALAN GREENSPAN – I think you better re-read my book

JON STEWART – Alright, alright, am I wrong that we penalize work by not making the choice to…

ALAN GREENSPAN – No, actually, what a sound money system does, is to stabilize all the elements in it, and reduces the uncertainty that people confront, and the one thing all human beings do when they are confronted with uncertainty is pull back, withdraw, disengage, and that means economic activity, which is really dealing with people, just goes straight dow, And so the key problem…

JON STEWART – It’s all about perception then. It’s about making people believe the system is sound, if the stock market is high, people feel confident in spending, and if it lowers they feel less confident.

ALAN GREENSPAN – Well, I think you have to recognize that there are certain aspects of human nature which essentially move exactly the way you defined it. The problem is, periodically, we all go a little bit euphoric until we get to the point were we are effectively assuming with confidence that everything is terrific, there will be no problems, nothing will ever happen, and then it dawns on us, NO.

JON STEWART – And then we go the other way, huge fear.

ALAN GREENSPAN – Exactly. You know I was telling my colleagues the other day you know, I’ve been dealing with these big mathematical models of forecasting the economy and I’m looking at what’s going on in the last few weeks and saying you know, if I could figure out a way to determine whether or not people were more fearful, or changing to euphoric, and have a third way of figuring out which of the two things are working, I don’t need any of this other stuff I could forecast the economy better than any way I know. The trouble is that we can’t figure that out. I said at the same meeting I was talking at that I’ve been in the forecasting business for 50 years, more than that actually, I hate to think about that. But in any event, I’m no better than I ever was and nobody else is, nobody,… forecasting 50 years ago was as good or as bad as it is today and the reason is that human nature hasn’t changed.  We cant improve ourselves.

JON STEWART – You just bummed the (expletive deleted) out of me.