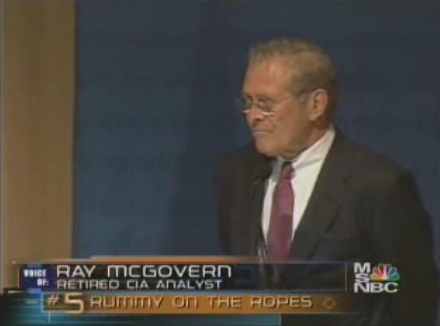 To put this video in context the American people might want to consider the facts that Rumsfeld is correct on. Saddam Hussein did use chemical weapons on his own people and in attacks against Iran. Therefore it goes without saying that Saddam, at some point, had chemical weapons capability.

It was likely the delay in executing the war that allowed Saddam to remove the evidence. Had Rumsfeld not spent so much time adjusting and reducing the Time-Phased Force Deployment List (TPFDL) and pentagon recommendations for troop strength, possibly to appease those that opposed the war (largely from the left side of the aisle), we might very well have found WMD’s in Iraq. Even the United Nations believed Saddam had them, and everyone knows he used them. What processes occurred that allowed enough time for Saddam to get rid of the evidence remains to be understood.

Keep in mind there was never a link established between Al Queda and the Iraqi government. The terrorists on the airplanes on 9/11 were mainly from Saudi Arabia and a few from surrounding territories (none from Iraq). As to why we did not invade Saudi Arabia, we were attacked by Osama bin Laden who was even considered to be an outcast to his own family. We were not attacked by the Saudi government (although their Madrasas were teaching students to despise America at that time).

It is certainly possible that there were still options available. It also shifted focus away from our intended target, Osama bin Laden. The Bush administration seemed to want to go into Iraq, so they took us to war (and that might be attached to the neocon agenda). In the justification phase, Condoleezza Rice (nat. sec. adviser) did raise, but with little fanfare, the proposition that oil is a security concern. She said it, but it went under the radar of President Bush pushing the terrorist agenda.

We have heard other things from Donald Rumsfeld that may more easily be construed as less than honorable, or without the greatest integrity. I recall before the war when he was asked if our troops had the armor and equipment they needed he replied saying that they had everything they needed, even armored humvees and proper body armor.

The main problem with these statements are not that they are misleading, or excuses, but that honor and truth are not served when politicians or their representatives say the most convenient words of the moment that fits their agenda of the day. Deceit should not be the modus operandi of the United States government. It is an insult to the American people and the military.

Although it is difficult to give a moral defense to one whose job includes convincing/deceiving the public for agendas that are not wholly honest or honorable; in defense of Secretary Rumsfeld, he served at the will of the President. It was his job to sell to the American People what the President wanted to be sold. The Buck stops with George W. Bush. Everyone else advises, argues, defends and supports positions, but in the end it is the presidents decision and directive they are obliged to support within the scope of the will of the President.

President Bush: “I do not need to explain why I say things. — That’s the interesting thing about being the President. — Maybe somebody needs to explain to me why they say something, but I don’t feel like I owe anybody an explanation.”

One can hope that our next president will believe and perform less like a king, but more a servant of the people, and the nation, of the United States of America.

As for Ray McGovern, he expressed his perspective analysis. That does not mean he was completely right either. Facts are easily bent to a particular view via rhetoric and perspective. The real question is was McGovern’s perspective capturing relevant scope?

Follow-up: Feb, 28, 2021 – Ray MacGoverns perspectives weighted an measured seem to have cognitive biases that weaken his own arguments. He has demonstrated in public talks that his scope is sometimes or moreso reliant upon argumentum ad vericundium in his circle. This raises many questions about analysts and groups of analyst’s. Since people tend to group with those that agree with them, we must always be careful to consider the degree to which something might be true against the possibility or probability that any bias may skew the presentation of rational argument and fact, thus resulting in facts used out of context and a rationality that is less than holistically logical.